Definitely, I am doomed. And I'm not just saying that for fun. 5 months after being left by the man I thought I'd bury (ok, I agree, I could have found a nicer way to express what I meant, but we're all adults here, right?), I am now in another "drama" Yes! I. HAVE. LEARNED. NOTHING!
Briefly, he should live in a forest, somewhere remote. This way, he is sure no one leaves a trace on his soul. His reason is irrefutable, undeniable, unarguable.
- "What do you mean care for a girl? I thought they were made to replace the blow up dolls." or
"I thought I was the only one who knew what sarcasm was! " or
-"I am not bored with you yet, so, I have a problem! I may like you, so now YOU have a problem:) etc etc."
The head of a kid who hasn't known love yet...and who is desperately trying to run away from it..not necessarily consciously.
His theory: love is bullshit, love ends, thus those involved end in Sufferville. So far so good, nothing new, been there, done that. I myself share the same idea: emotion is bullshit and those saying that it is better to love and suffer than not know love at all have never been on the verge of suicide because of this "wonderful" feeling.
His strategy: hit and run. Again, so far, so good, shared this idea for almost 4 months (before he appeared).
His plan: be single for ever. Aaaaaand STRIKE again..
So many similarities between the two of us, it's scary.
But that was until he let Satan into his life, that would be me. And feel like I did the same :))
I broke his code and made him break his relationship time barrier: 3 weeks. Too long in such a short life, wouldn't you agree? He broke mine and showed me I still got a lot to learn about myself. Yeah, it looks like what I did to him is by far less meaningful.
He came into my life with good intentions: bring me back to life. But it seems he's starting to "cut" himself...and I let him cut me. 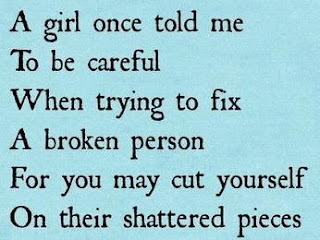 Everything in the past 2 months leads me to believe that, in the end, we might be love seeking individuals. Just because most of us grow up with people who teach us that love is important, that love is everything...blah blah...
I haven't lived in such family. The word "love" has never been pronounced out loud when being around each other. So now I wonder : am I naturally looking for love or running away from it? Aren't we a bit brainwashed by society?
Cause no matter what, we are constantly reminded that we all look for happiness. And this word includes love by default.
Happiness means a great relationship, thus loving and being loved by someone.
Happiness is doing all the things we love...little things that matter.
Happiness is living by yourself, thus loving yourself.

Anyway, who am I to question the natural order of things?
I don't know.
Six months ago (while still with Bob...oh! this is the first time I mention Bob. Hi Bob!:)) I thought I had all the answers to the question: who am I? I was a woman in a long relationship, I was a woman with a serious commitment, I was a woman in love.
And when the relationship stopped defining me, I got lost.
But the questions that now reside in me are: was I feeling like that and was I hurt cause Bob was gone or because the thing that defined me disapeared from my life?
Was the period when I wouldn't stop crying and not eating a mourning of my own self?
I hate it when I'm serious and I hate not being able to have a real answer 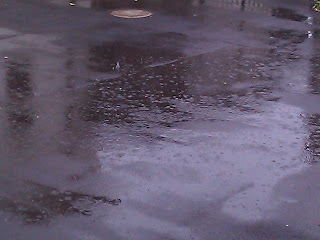 maybe I'm like this cause of the rain...and I looooove the rain
Lived by Lexy gray at 5:53 PM