I was once told that two failed relationships in 15 years - one that lasted 7 years, the other 8 made me a failure. Especially cause now I'm in my 30's..or as I like to say, late 20's.

I, for one, wouldn't put it like that.
I'd say it's experience. Or better yet, I'd say it's stupidity.
Cause if I were smarter, there would have been 0 relationships before 35.
I saw a t-shirt once that said:

It's easy to guess what my t-shirt would say.

Is it really like that? Should the fact that our relationships didn't work make us failures? What ever happened with I HAVEN'T FOUND THE RIGHT ONE? Or the right one hasn't found me?

Honestly, that thing about finding our soul mate is just a load of crap, if you ask me. Just something to sell more Valentine cards and make little girls dream about big weddings and spending like crazy of stuff that will either be worn once or last less than the life of a butterfly.

And honestly, what sane person who is nowadays in their 30's expects to find someone who will stand by their side till death do them part? That is something you only find in fairy tales. And kids should question this: why does the story end when the characters just found love?

Why doesn't it last until we see her driving him crazy during PMS?

Or him cheating on her cause she had one too many headaches each time he wanted to play doctor. 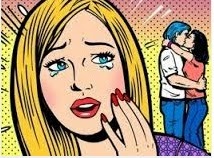 I am now really convinced that life is unfair for women. Why?
Everybody knows it and it's been debated ever since a woman got out of the cave and realized that hunting was overrated.
A man can start up a family even in his 50's. A woman, on the other hand can start looking for a nursing home at that same age. Just because the sperm can still find its way to ...wherever it's going.

Now, going back to my love life...
Would I still be a failure in terms of relationshits if I had 0 serious commitments till this age, but had lots of sexual experiences?
Would I still be a failure if I acted like most men and sleep around, then finally decide to settle down, not necessarily have a family, but just a relationship that lasted more than a bad TV series?  This asks for more than one post, that's for sure.

I may have had 2 failed relationships, but I'd say I've grown with each of them. And not cause I learned lots of things that would help for my future relationshit, but cause I discover myself.
Maybe I'll die alone, maybe not, but, in the end, as Carrie Bradshaw said, "the most exciting, challenging and significant relationship is the one you have with yourself. And if you can find someone to love the you you love, well that’s just fabulous.”