Ok, ok the waiting is over for me. The KID was nice enough to let me write tonight. I had to sell my body for that and, trust me, he'll come collect later...if not sooner. Especially because our days and nights together might be numbered. Oh, too long of a story to start now.

This post is actually to complain about my monster child. But then again, is there any other kind? Oh yeah, that's right: they're little angels.

Nowadays it's the Cold War again between me and Bob because we have different views on how to raise our child.
But I guess it's like that with all separated parents, right?

I am the bad guy now cause I don't let Kidzilla act like the KING OF THE WORLD and I dare say NO to the little prince of darkness. I say NO so that he wouldn't become Satan later.

When exactly and who taught toddlers that it was ok to ask why when mom says no???

Me: Baby, go clean your room please.
Kidzilla: Will you come help?
Me: No.
Kidzilla: Why?

Kidzilla: can I have one more chocolate?
Me:  No.
Kidzilla: but whyyyyyyy? (with tears and all...)

* This one is entirely my fault and I explain:
he loves chocolate so, since it's the only thing that ever "touches" him, whenever he's punished, I remove chocolate from his menu. And, to exploit this ever better, about a year ago I told him that it was really hard to live without chocolate and I, for one, couldn't do it.
It was really funny once when he was trying to convince a friend's kid who was 1 year younger of this same theory.

Kidzilla: Can I have one more juice?
Me: No.
Kidzilla: But why? Dad gives me as many as I want.
Me: Of course he does.

Me: Get ready for shower.
Kidzilla: But I'm tired.
Me: It'll be a quick shower; you need to take one.
Kidzilla: Why?

You know what's even worse?? When he asks me WHY once more right after I explained.

Most of the times I just wanna say:
BECAUSE I SAID SO!
But I've only said that once or twice in his life and only cause I had run out of arguments.
And now we get to the KID's favorite time of the day: Kidzilla's dinner. Or lunch.
Why? Cause, if Kidzilla doesn't like the food he is served, well...he'll take about an hour and a half to eat. Not kidding!
Kidzilla doesn't like food unless it's made of potatoes, soup must not contain any visible vegetables, meat can't be anything else but chicken or turkey...And the list can go on until you realize you don't really want kids.

As I said, I talk to my son about anything. And ever since there were just the 2 of us left, I tried to teach him that me and him were a team.
So, I encouraged him to talk to me about everything. Which he does...During his dinner...or lunch...or when he's in the toilet...or when I'm trying to get 10 more minutes of sleep..
This is what drives the KID crazy. Cause, unlike him, I seem to have a lot of patience. Me!!!
I don't know where that comes from; I guess it's either patience or feeding him like this: 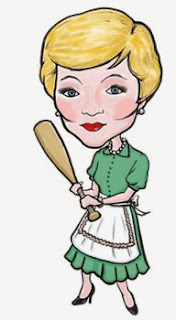 I signed Kidzilla up for football lessons last week and he is really excited. I am hoping he will burn some of the energy he's got, enough to exhaust even a race horse. There he is, in action (white t-shirt, dark pants): 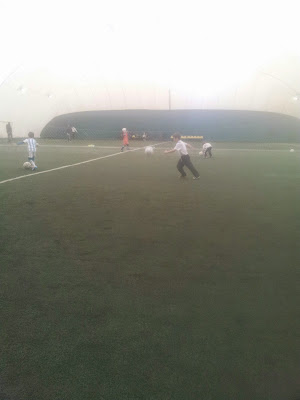 Oh, I almost forgot. One more thing that Kidzilla enjoys is drawing and coloring. It doesn't mean he's good at it. No, I am not a mean mom, and you'll see why.
Yesterday evening I had this crazy idea of drawing each other: Kidzilla drew me and the KID, I drew Kidzilla and the KID drew Kidzilla as well. Actually we made each other's portraits. Take a look and, before you judge (laugh, I mean), remember that we must encourage our kids: