Today I am outraged...more of a Grinch than Mrs. Claus spirit

I must've reached that age when I have 0 tolerance for such shit (pardon my French).
Oh, what shit, you ask?

I am sure you are all familiar with a thing called Secret Santa.
For those who don't know what that is, here's Google:

Secret Santa is a Western Christmas tradition in which members of a group or community are randomly assigned a person to whom they give a gift.
The company I work for only introduced the concept 2 or 3 years ago and I thought it was a great idea.

Cause this year, my dear colleagues have done everything to find who's buying gifts for whom, made lists with what the acceptable gifts are, what not to buy, etc.
When I asked about the budget we're supposed to put into this, if it were a fixed one or it's anyone's choice, I was told that I should have a look at people's wish lists to know about the budget.

The point of a Secret Santa idea, at least at work, from where I see it, is to buy that person a small gift of your own choice, right?
Ok, some may get shitty gifts (pardon my French), but, the whole point is to offer something to someone, to have fun with it, to try to surprise the person, choose something nice as if it were for you.

This year, surrounded by all this, I feel as if I'm the one missing the point.

I can understand that one might get something the person would actually use or need, but where's the secret in that?
Also, if you want a particular gift, don't expect a stranger (not everybody knows everybody in big companies) to buy it for you... that's just...wrong!

So...to show you what a Grinch I am

- doing it just cause I'm mad about the whole thing and because the person I drew had too many NO THIS, NO THAT, BLAH BLAH - I bought the person the thing I would like to get : a book to enjoy with some red wine.
I'm pretty sure the gift will not be appreciated, but I am fine with it.

Kids, what have we learned today?

Do not make a mockery out of Secret Santa 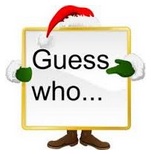 or Secret Santa will make a mockery out of you