Marriage, children and other disasters

Just when I thought I had problems, well...I realize I do have problems.
Turns out Friday evenings are great to see your friends. I may even go as far as saying that it's a wonderful idea. Go out to a pub, have a bite to eat, a drink and talk about ...anything and absolutely nothing.
Unless your friends are married and mothers to the sons of anarchy.

Last night I realized one more time that Kidzilla is really a little angel who will turn 6 in a few days. 6 years old! Oh dear God! I am really getting old! I meant to say old..er.
One of the things you become aware of when you turn 30 is not necessarily how many things you lack or how far you are from where you wish to be at that age: it's how little time you have left.
Once you passed 30 there's yet another surprise: for you, time does not pass by the same way it does for the younger or older than you. Time goes by faster...and faster.
I know all you 30 somethings are well aware of this, but for me, it was quite a shock to discover it.

Anyways, I am getting away from the point. I was telling you about the friends I've seen last night: 2 desperate mothers, as my father elegantly called them.
Grown women, like Queen B says in this song I've been obsessing over this week:

When I was younger and kid-less, I was one of those persons who cannot be around people with kids. You know why? Because they can't stop talking about their kids.
No matter the conversation - politics, literature, sex, 50 shades of Grey, Buddha, religion, Jesus Christ - you always end up talking about kids.
I swore not to be one of those people.

Now that I am a mother as well, I am forced to listen to these people and I'm not allowed to complain.
So last night I listened to my friends talk about their marriages and children and lack of sex (something I related to due to the KID's absence).
Mother and wife number one - 4 year old son; been with her husband for 12 years - on the verge of punching anyone  in the face -

Mother and wife number 2 - 2 and a half year old son; with husband for 5 or 6 years (not sure, I'm afraid), on the verge of punching mother in law in the face -

What the first two have in common, besides the obvious: their children are Antichrists and they have mother in law issues.

- their kids bang their heads against walls, doors, furniture even though their poor mothers beg them not to
but when their mothers try a bit of reverse psychology telling them to do it, well...the little devils stop with a little grin on their face

Did I mention that they want all the above at once?

- they hit whoever doesn't obey and that includes mother, grandmother and other close relatives

And I thought my kid had issues with anger.

Another thing married women have to deal with when they give up taming the little beasts (sorry girls, couldn't help it :-))) are the in-laws. This is one thing I've managed to escape...so far. 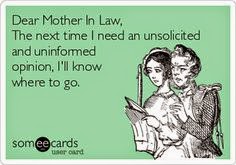 Hearing them complain about their mothers in law was like watching  Monster in law.
Seems like these women will stop at nothing.
From going through their daughter in law's closet to feeding their grandchildren all kinds of crap, to complaining to their sons about their poor taste in wives and so on and so forth...

The irony is that the 3 of us girls have boys and I wonder if this will turn us into monsters in law later. In our crazy rush to protect our sons and to give them everything, will we become some kind of "terrorists" and spend our time intimidating and driving crazy any girl that would dare approach our precious little princes?

Who knows? lack of sex and drink creates monsters ...
but for now, we're...FLAWLESS