We are never so defenseless against suffering as when we love. – And it’s Freud who said it, not me! Sooooo, simple mathematics give: in order to avoid being hurt, do NOT get emotionally attached.  Question: does that apply when you love yourself? :)
Now, back to SUFFERVILLE…
One nervous breakdown, one rush to the hospital (no flirting with the surgeon this time), one NO, I DO NOT WANT A PERFUSION phrase to the nurse, one crying and breaking things episode later, I find (for the 90th time) that I am not at all what and who I thought I was.  Three months ago when SHIT (no, I am not referring to HIM…even though it would be a great start in my healing process) came at my door and said: hey, I should teach you a thing or two about life, I thought I was a strong woman, capable of doing almost anything (but not pass a driving license exam), knowing a bit about good relationships and who was living the perfect love story (weeeeeeeeeeelllll).
Now the only thing that’s left is that I am a woman (no doubt about that). I have actually become one of those women I thought I hated; you know, the kind that cries over a man for ages, who won’t go on with their lives because they love HIM, even though their man cheated and lied (this is all the bad stuff I can think of right now). Aaawwww! Isn’t that sweet? NO, IT’S NOT!
From the outside, it all seems so easy: come on, it’s just a guy who hurt you. How can you still love him or want to be with him after all he did to you? If I were in your shoes, I would erase his number from my phone and just forget I ever met him”. Riiiighhht! When it’s you on the bathroom floor crying your heart out and looking online for magical FORGET HE EVER EXISTED tips, it’s everything but easy.
Try to explain this to the next idiot who tries to cheer you up: how the walls are falling down on you the moment you open your eyes in the morning, how you feel like having a thousand knives stuck in your heart when going to work and seeing him/her there smiling to someone else, how you carry the world on your shoulders but feel like a wounded Atlas, how good it would be if waking up in the morning the next day was optional.
It seems that I, for one, am not capable of learning anything from other people’s life experiences. As long as I don’t hit the glass wall on my own, I will ignore everyone warning me there is one in front. You get my point, right? I’ve seen stuff on TV and read articles about women who found themselves in very difficult situations and went: “oh, that’s terrible! Poor thing, her husband took off with another woman after 10 years of marriage, he left her alone with their two kids and she has no job. And they were the picture perfect family. Who would have thought?”
Two seconds later I’m thinking: “This is not going to happen to me. My guy would never do something like that. My home is safe; my relationship is based on love and it’s going (almost) great.”  I’ve got one word for those who say that: BULLSHIT! Well, the one thing I learned so far is : NEVER SAY NEVER. It’s a cliché, but SHIT can happen to the best of us.
I am not teaching anyone to live in fear that everything around may fall apart at one point, just…be prepared for anything! My mistake throughout the years was the fact that I had never ever ever ever even envisioned that the love of my life would ever leave me or our family no matter what; no matter how hard the situation seemed to be, I thought our love was strong enough to overcome the "little things" that, unfortunately, in the end mattered.
I loved an article I read recently; it convinced me of something I already believed in. Briefly, it said that, instead of trying to change the person we’re with, we should first try to understand his or her fears, faults and frailties and then become an ally and help the person we love “grow from all his or her negative and positive experiences. When you can grasp all this, you simply stop judging your mate and begin loving and caring for him or her for who he or she is, and not what you want them to be.” 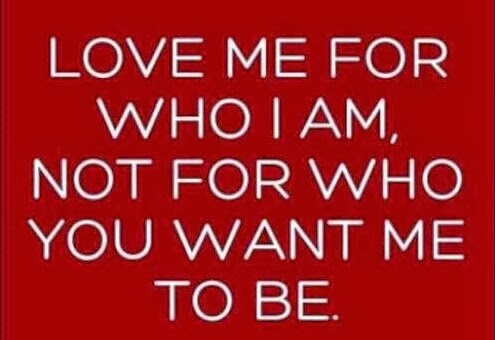