Let me start by telling you this: send your kids to bed, cause this is not a post for those under age.
Don't worry, there will not be any foul language (well...maybe a bit), nor will you see anyone naked (well...maybe a bit), but puritans should turn off their computers now cause I'm about to get crazy. Don't tell me you thought I was a sane person :) And I have a reason to be crazier than usual cause KIDZILLA is on holiday with the Lord of Darkness, Bob that is...his father, pour les connaisseurs.

As some of you may already know, my (new) house is a mess, looking like Baghdad. Just so you understand, this is my father's way of expressing the idea of a total mess, muddle, disaster...you understand. You know...cause Baghdad is a war zone and he's a military...
When I used to live with my parents, each time he entered my room he would say: "aren't you gonna clean up here? it looks like Baghdad." That was during the Golf War. Yes, I am that old.

Anyways..getting away from the point.
What I actually meant to talk to you about here was how I spent my evening. I'll tell you: like a queen.
While the KID is setting the shades to the living room windows, I am having a glass of wine and loads of ice cream...honeydew flavor. I am sure the pics below will give you an idea about my evening:

1st - he measured the shades and then he cut some cause they were too long
this was not a difficult work, but it was time consuming...so the KID hated it cause it kept him from spending this time with me instead (read ... having sex instead) 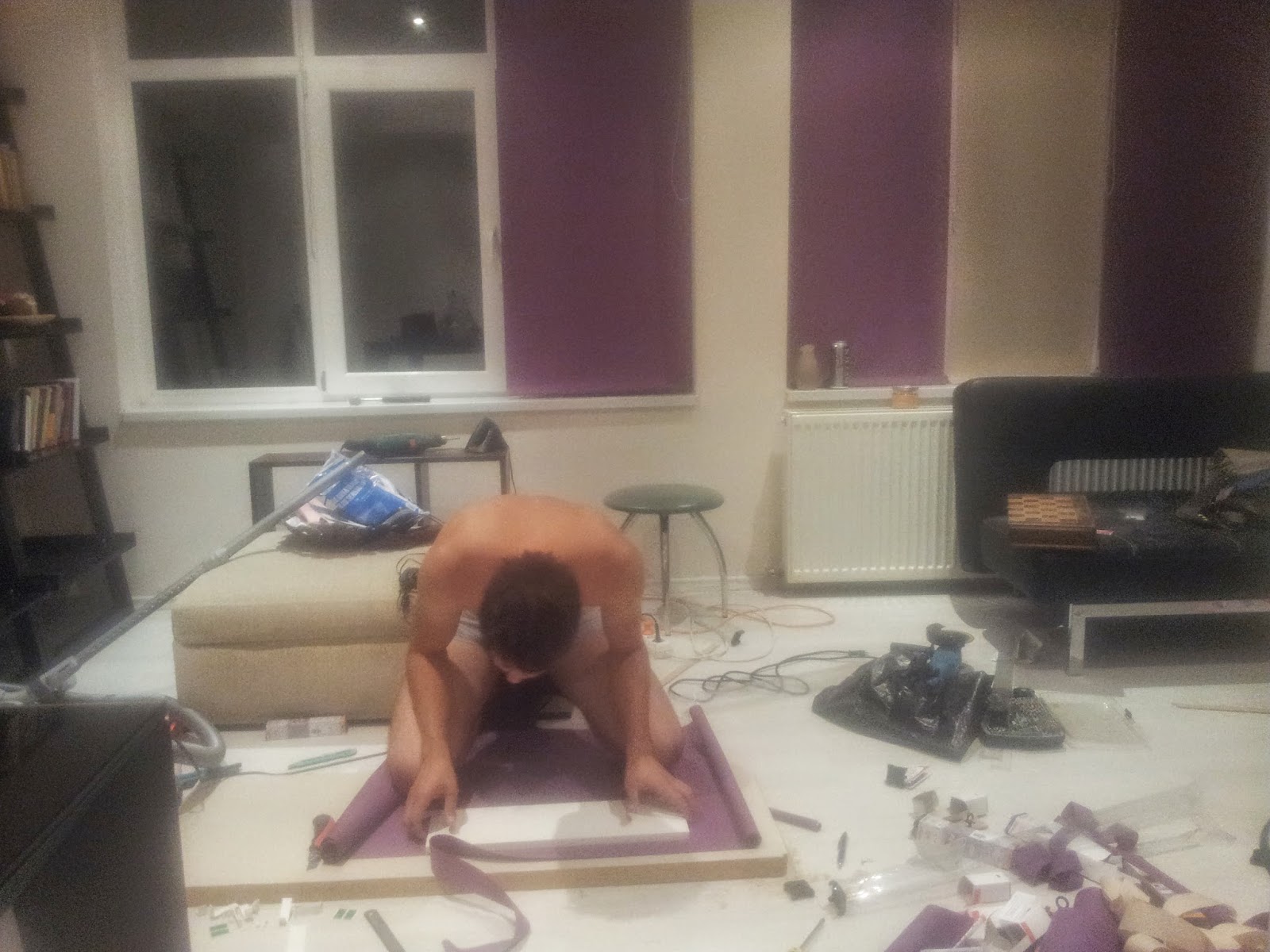 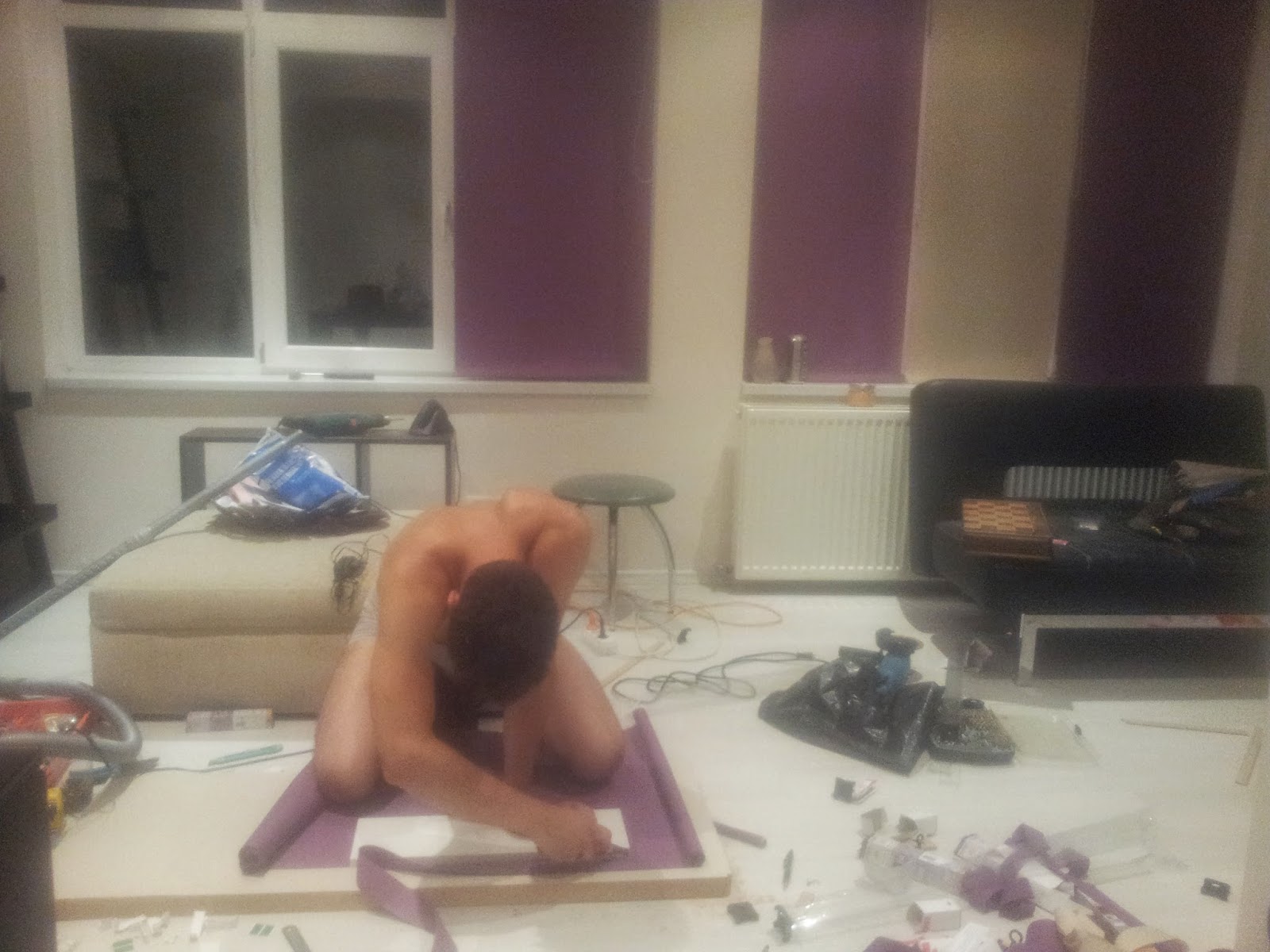 3rd - he climbed and made some holes
and yes, that's his work uniform ;) 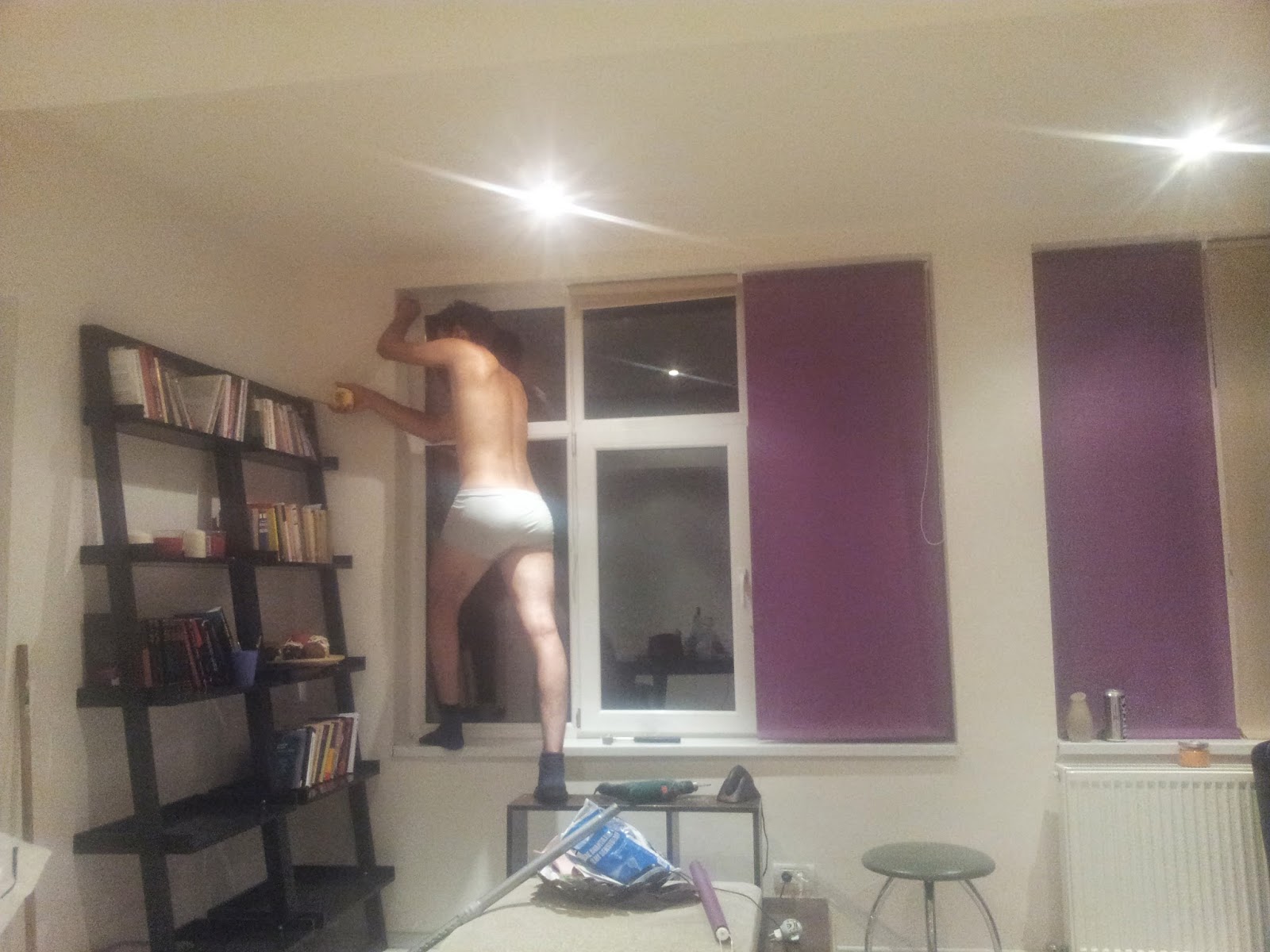 That's right, this is how I put the KID to work, while I have my glass (read bottle) of (slightly bad) wine and my box (empty now) of ice cream . Rest assured, the KID had some ice cream too, I didn't eat it all by myself. 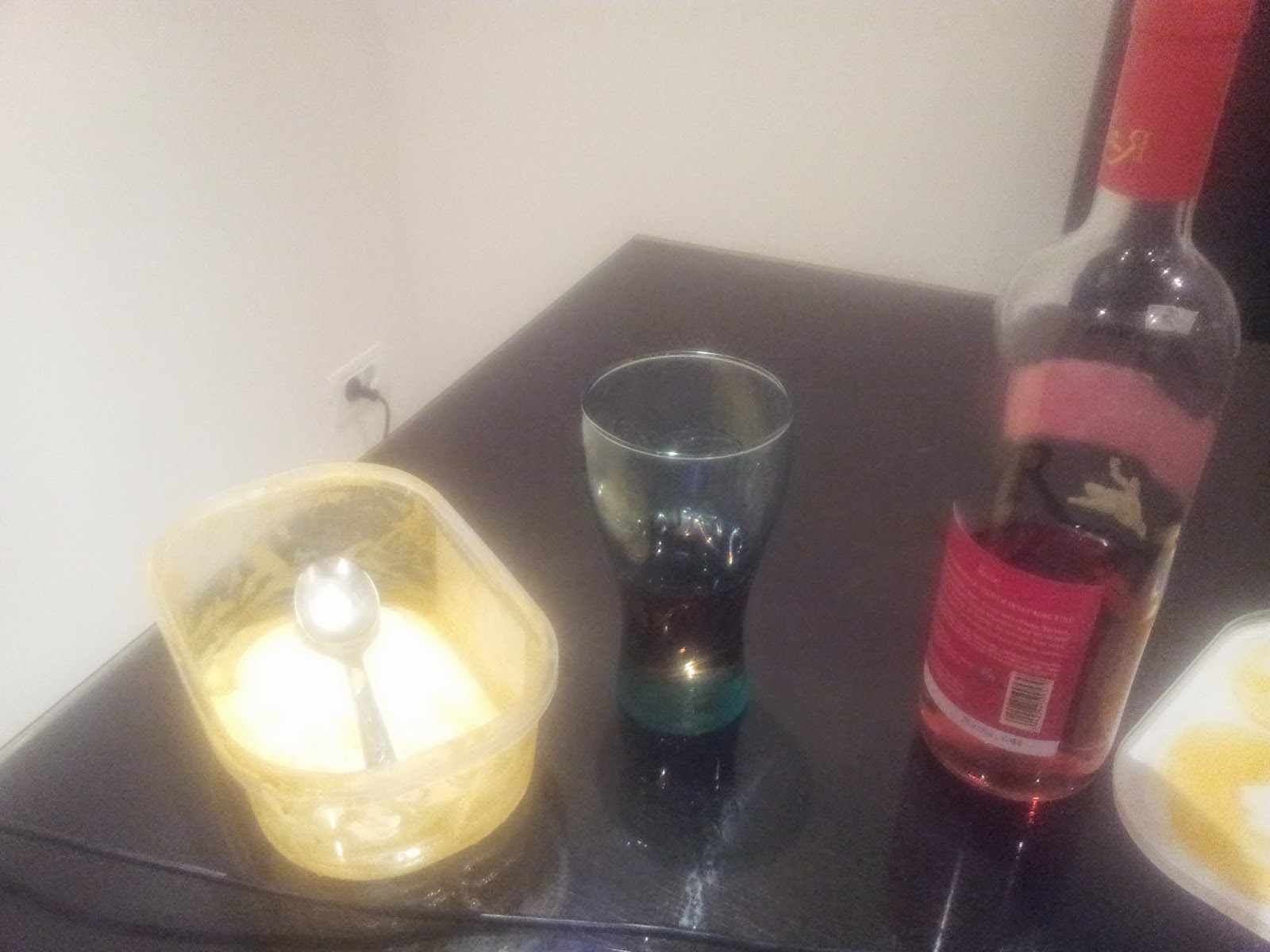 More than half of bottle of wine and a lot of ice cream later, ta daaaaa! I can walk naked in my living room without the fear of being watched by my pervert neighbors. 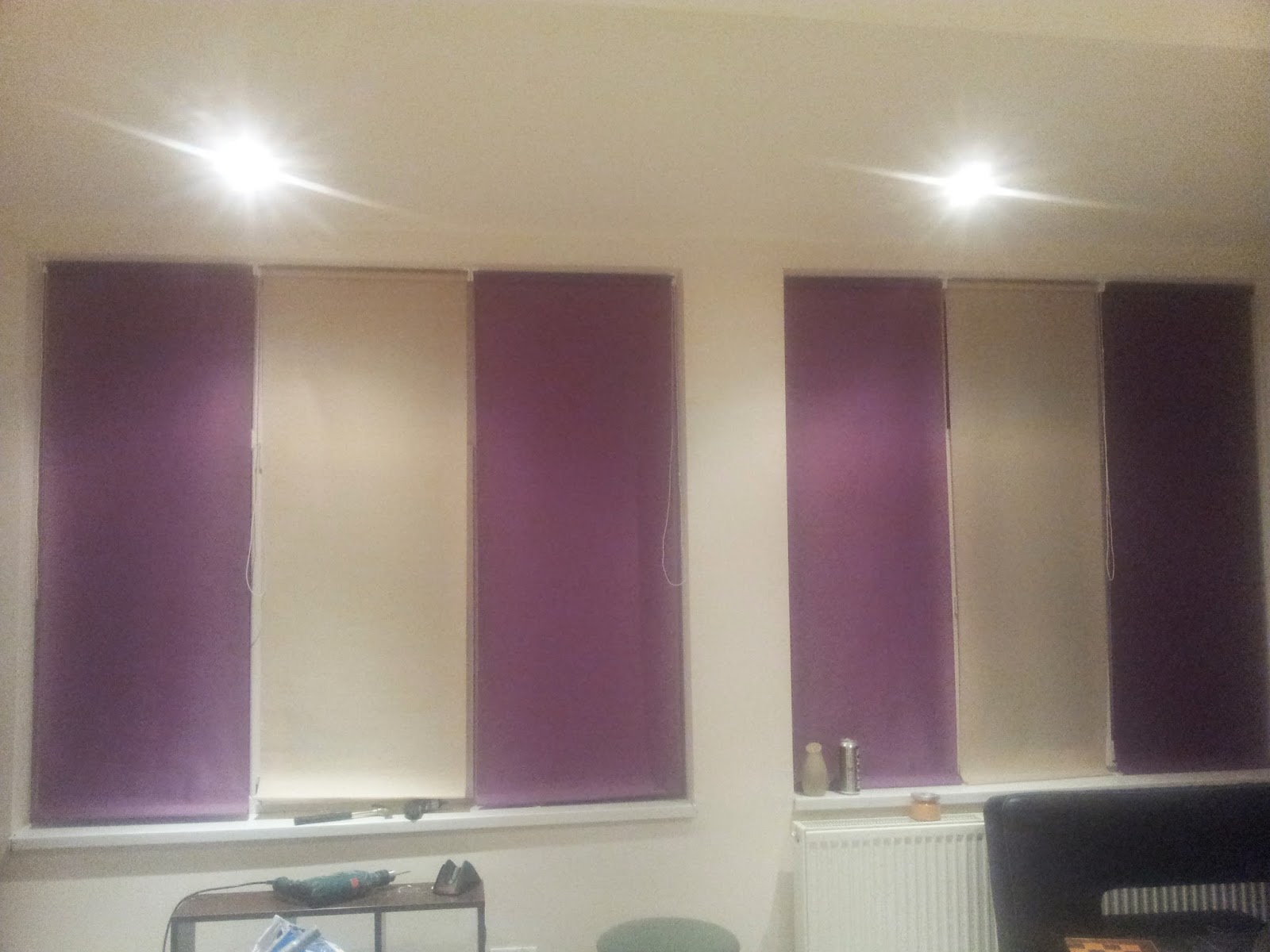 This is a bonus pic of the KID making friends with a pussy..in my own home:)) 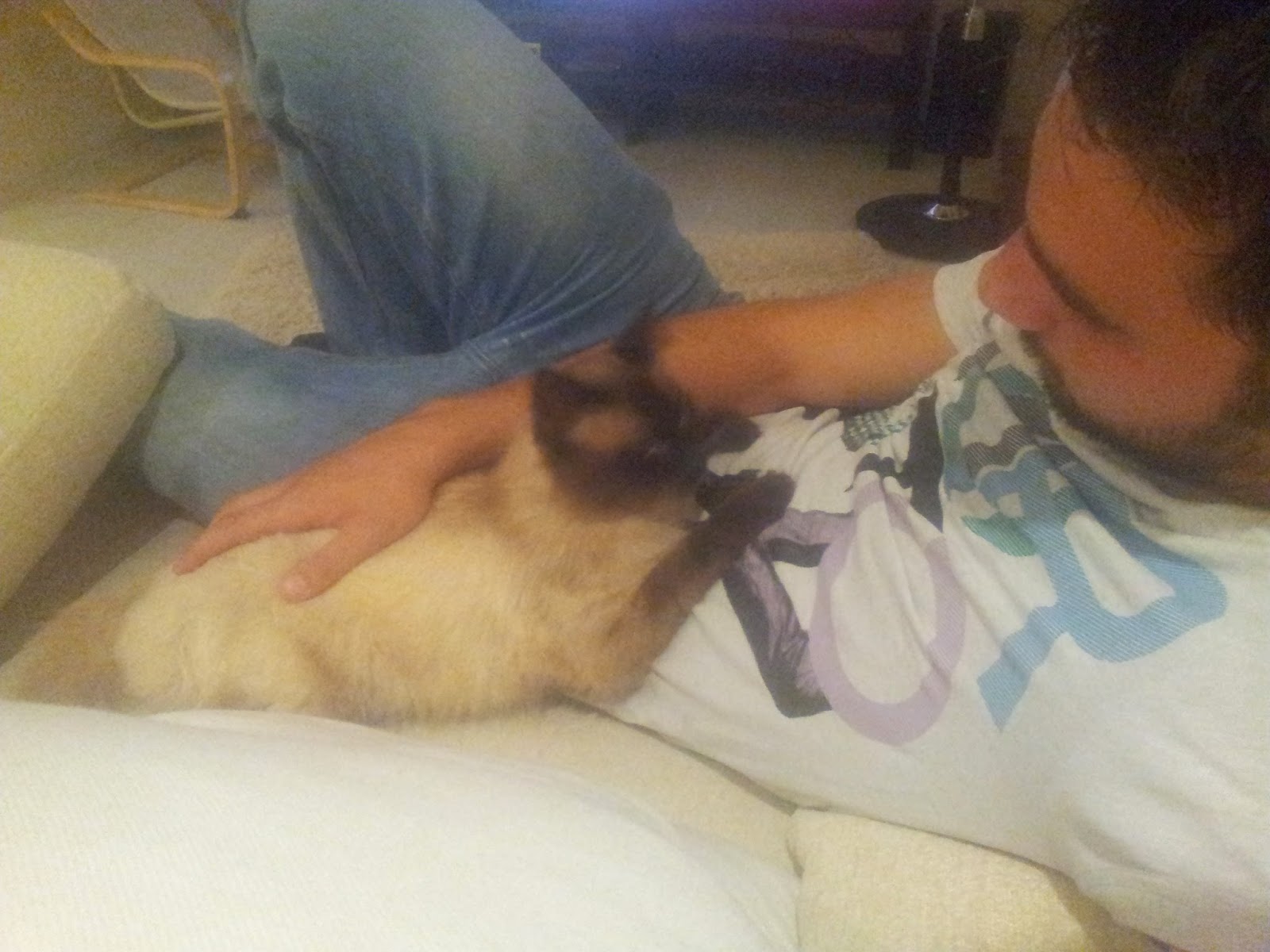 I have no idea whose pussy it is, it just started visiting us daily, eating my dog's food and being more than friendly.
Just so you know, I'm not a cat person cause I lived with my aunt for 4 years and her mother-ship cat (trust me, there's no other word for that thing) had babies every 3 months. Each time, at least 4...and my aunt kept them until they were about 2 months old (til she found homes for them), time during which I had the same sleep planning as the cats.
If you know little about these animals, I'll tell you : "Free-ranging cats are active both day and night, although they tend to be slightly more active at night."
Slightly, my ass (sorry..I guess it's Tourette)! If there's a group of siblings, they play all night and chase each other like crazy..So what if the human sleeps on the couch? Let's run over and jump on her face!
Good night, everyone:) Enjoy your cats, dogs, kids and...KIDS;)