I'm learning it the hard way: it's gotta get worse before it gets better.
And it's not the first or the last time I see this. It's only been a year since I last received this lesson from this thing they call .
Some call it . Others prefer to call it . The most fortunate call it .
But some just live it and hope to get quality entertainment.
I haven't decided what it actually represents to me. For now...let's call it I'M BUYING A HOUSE BUT I'M NOT THERE YET AND WE'LL SEE HOW IT GOES ONCE I MOVE IN.

Things should be simple : you see a house, you buy it, you move in and that's it. But hell no! This is not how it actually happens in the world of mortals, and when I say that, I mean those who don't make 10,000 USD/month.
As I said, I found my house, I am in the process of ending everything with the ex, my old house and the bank. We already signed the papers that make Bob the one and only mortgage payer for our old house and me, a happy owner of a new mortgage on my son's future house. Yeap! I am celebrating 20 years of debt so that my son has 2 houses when he grows up. Now all I can hope for is that he doesn't become one of those spoiled brats or one of those kids who send their parents to a home when they get old.
By the way he's been acting lately...but well, this is another story.
Me and Bob are playing good cop, bad cop with me starring as Dirty Harry: "go ahead, make my day! don't eat your soup!" 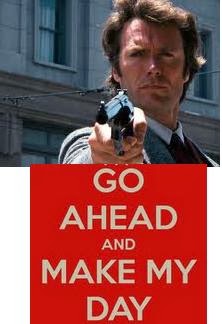 Actually, we're playing good cop, bad cops, cause I have the KID by my side to help me out with Kidzilla.


I actually started by thinking how strange life was for one reason and one reason only: all these things now happening in my life made me remember how I was same time last year.

Last March I was thinking about ending my life cause a man decided I should no longer be a part of his life. A man...a simple man, another human being.
And last year I was stupid enough to let this other human being indirectly decide whether I should live or die.
Luckily, I let someone else decide for my life: MY SON. And maybe it doesn't make much sense what I'm saying now, but I'll be forever grateful to him for that. Maybe this is why I let him do what he pretty much wants now...Just kidding:)
This is one of the things I should change about me: joking all the time, even when the situation is very serious and charged. And no, I wouldn't make jokes at a funeral...I think. Or maybe I would, cause I can't handle this kind of moments.
I think that joking might be my defense system. I'm thinking: instead of panicking or crying or punching someone in the face, I should make a joke. But we're getting away from the point...
Last March I wasn't gonna let anyone else (I mean men) get close to me. Unless for sex, of course. I'm just a mortal and like all normal mortals, I enjoy sex. By the KID's standards, I'm almost frigid (cause I don't think about sex every 2 minutes like he does), but getting away from the point again...
Last March I wasn't thinking about ever leaving this house, the house Bob and I bought 3 and a half years ago. But of course, last March I didn't know that the house would be too much for me to handle by myself.
Last March I agreed to Bob's idiot condition of never bringing another man into our house because in my stupidity, I was convinced that I was going to spend my whole life crying over him. I was gonna turn the house into my own personal convent.

All this ended when, in April a 23 year old with brains and balls decided he was gonna make my life better. And so he did...
First he attacked the neurons by exchanging smart emails with me about ...things both him and I found interesting. From music to psychology.
Then he went for Mona. And Mona felt comfortable letting him in. Ever since...
Last but not least, he started digging his way to my heart. And he's still doing it. Ever since...

In little time, I went from being down to building a new life for myself by gathering all the pieces from what used to be me and adding new ones.
Lived by Lexy gray at 9:58 PM